the truth about melancholy and diet


Melancholy is the most important to us
Lead is one of the foundatins of alchemy and of transmutation
Saturn, Falcifer (he who bears a scythe) is of note to our alchemical and astrological projects

The conjunction of all seven Wandering Stars and the Elements, Humours, and Metals instructs us about our physical body 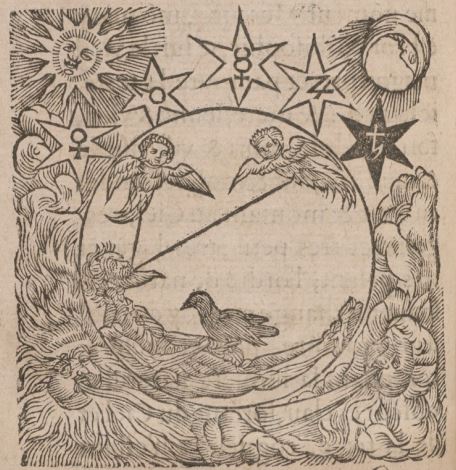 Here I will cite the excellent Sick-Man's Rare Iewell at length
There are fluid parts which are sustained by the help of the other parts,
such as are the Humours and Spirits. The Humours are either Alimentary or Excrementitious;
the Alimentary humour is that that is dedicated for the nourishing of the solid parts, which do draw their Original from a Commixtion of the four Elements:
But the Excrementitious, are the superfluous Liquors, unusefull, and unfit to Nutrition; and these are distinguished into Primary and Secondary.
The Primary are those which pass with the Chyle into the Liver;
being put on by the power of the Native heat in every part of the Body, are distributed by the Veins to Nutrition.
And of these primary humours there be four; Blood, Choler Melancholy and Flegm;
which be mixed well together in the Veins. This four-fold mixture of humours is call'd the Mass of Blood,
by reason that the blood doth abound in that Mass.
The name of Blood is sometimes taken largely for the whole mass of Blood, but properly it signifies the more benign and purer part of it;
generally the Blood is accepted for the whole bloody mass well tempered, which from an equal mixtion of the four contrary humours,
and so there ariseth a harmony from a just and decent proportion of humours;
but if it be considered by it self as pure and since it is hot and moist in temperature
In Nature it resembleth Aire, and not as by Reason of this tempeature, but also in consistence, colour, savour and use it is discerned from other humours
Blood is of such a mediocrous consistence, that while it is retain'd within the bounds of Nature, it appear not thicker nor thinner;
it is of a red colour, a sweet taste; it mightily nourisheth the musculous parts, as often as it exceedeth above the rest, it maketh men fleshy, flourishing, fair, pleasant and merry. But Alimentary bile is the thinner part of the bloody mass,
partaking of a fiery Nature, by temperament hot and dry, of a yellow, or a pale yellow;
to taste bitter, men in whom it abounds, are cholerick, lean, hardy, quick, soon angry.
But the Excrementitious is drawn forth to the bladder of Gall, and that it might stir up the Ejection of the Excrements,
and that it might gently cleanse off the Flegm and hindrances adhering to the Intestines.

Melancholly. what. part of the mass of Blood, by nature Earthy, in Temperament cold and dry, in colour black, in taste soure;
men in whom it abounds, are sad, thoughtfull, morose, severe, constant, the more solid parts of the body dry.
The Excrementitious is carried to the Spleen, where the Alimentary part which yet remains, being the more benign Juice,
the rest is separated, when it is press'd into the stomach by the Vas breve, that it may stirre up Appetite to meat, and doth endeavour to retain the Meats there, till they be concocted.
The Alimentary Flegm is the more thin part of the bloody mass,
of a waterish Nature, in temperament cold and moist, in colour white, in savour sweet,
men in whom this abounds, be dull, sleepy, gross, fat, they are clear and soft, administring Aliment to the Brain, and other cold moist parts.
Excrementitious Flegm is a serous, or a wheyish superfluity, which is separated from the blood, and is transmitted to the Bladder by the Ureters, where it is call'd Urin.

Here follow the Signs of a Sanguine person.
HE hath a flourishing and a Rosecolour in his face, as it were with an equal mixture of white and red, by reason of the skin lying outmost;
of a red, because of the Blood spread underneath the skin: In manners he is courteous, gentle, easie to be spoken to, of a lovely Countenance,
and a smooth forehead, seldom angry, but taking all things in good part; for as is the nature of humours, so is the disposition of manners, their Dreams are pleasant,
they are troubled with Diseases arising from the Blood, as frequent Flegms, many sanguine Pustils breaking through the skin, much bleeding,
they delight in the use of cold and dry things, and are affected with hot and moist.

Signs of a Cholerick Person.
Cholerick men are of a pale, or a yellowish colour, of a lean, slender, rough habit of Body, with fair Veins, and large Arteries, a strong and quick Pulse;
their Skin being touched, feels hot, dry, hard, rough and harsh, with a pricking and acrid Exhalation, which breaths forth of their whole body;
they cast forth much Choler by Stool, Vomit and Urine; they are of a quick and nimble wit, stout, hardy and sharp, Vindicating of Injuries received,
liberal even to prodigality, and somewhat desirous of Glory, their sleep is light, and that from which they are quickly awaked,
their Dreams are fiery, burning, quick and full of fury;
they are delighted with meats and drink, that are somewhat more cold and moist, and are subject to burning and Tertian Feavers,
the Phrensie, Jaundise, Inflamation, and other Cholerick Pustils.

The Signs of a Phlegmatick Person.
Those in whom Phlegm hath the dominion, are of a whitish coloured face, and sometimes livid, and swollen, with their body-fat, soft and cold to touch,
they are molested with phlegmatick diseases, as Oedomatous Tumours, the Dropsie, Quotidian Fevers, falling away of the Hairs, and Catarrhes falling down upon the Lungs,
and the aspera Arteria or the Weasen; they are of a slow capacity, dull, slothfull, drowsie, they do dream of Rains, Snowes, Floods, Swimming, and such like,
that they often imagine themselves overwhelmed with waters, they vomit up much watery and Phlegmatick matter, or otherwise spit and evacuate it, and have a soft and moist tongue.
And they are troubled with a doglike hunger, if it at any time should happen that their insipid Phlegm become acid:
and they are slow of digestion, by reason of which they have great store of cold and phlegmatick humours, which if they be carried down into the windings of the Cholick Gut,
they cause murmuring and noyse, and sometimes the Cholick; for much wind is easily caused of such like phlegmatick Excrements, wrought upon by a small and weak heat,
such as Phlegmatick persons have, which by its na-natural lightness is diversly carried through the turnings of the Guts,
and distends and swells them up, and while it strives for passage out, it causeth murmurings and noyses in the Belly, like wind breaking through narrow passages.
The Signs of a melancholick Person.
THe face of a melancholick person is swart, their countenance cloudy, and often cruel, their aspect is sad and froward,
frequent Schirrhous or hard Swellings, Tumors of the Spleen, Haemorrhoids, Varices, or swollen Veins, Quartane Fevers, whether continual or intermitting, Quintane, Sextane, and Septimane Fevers;
and to conclude, all such wandring Fevers or Agues set upon them, but when it haphappens, the melancholly humour is sharpened,
either by adustion or commixture of Choler, then Tetters, the black Morphew, the Cancer simple and ulcerated, the leprous and filthy Scab,
sending forth certain scaly and bran-like Excrescences, being vulgarly called Saint Menis his Evil, and the Leprosie it self invades them;
they have small Veins and Arteries, because Coldness hath Dominion over them, whose property is to streighten, as the quality of heat is to dilate;
but if at any time their Veins seem big, their largeness is not by reason of the laudable blood contained in them, but from much windiness,
by occasion whereof it is somewhat difficult to let them blood; not onely because that when the Vein is opened, the blood flowes slowly forth, by reason of the cold slowness of the humours,
but much the rather, for that the Vein doth not receive the impression of the Lancet, sliding this way and that way by reason of the windiness contained in it,
and because that the harsh driness of the upper skin resists the edge of the Instrument. Their bodies seem cold and hard to the touch, and they are troubled with terrible Dreams;
for they are observed to seem to see in the Night, Devils, Serpents, dark Dens and Caves, Sepulchers dead Corpses, and many other such things full of horror,
by reason of a black vapour diversly moving and disturbing the brain, which also we see happens to those who fear the water, by reason of the biting of a mad Dog.
You shall find them froward, fraudulent, parsimonious, and covetous even to baseness, slow speakers, fearfull, sad complainers, carefull, ingenious, lovers of solitariness,
Manhaters, obstinate maintainers of Opinions once conceived, slow to anger: but angered not to be pacified:
But when Melancholly hath exceeded Natures and its own bounds, then by reason of putrefaction and inflammation, all things appear full of extreme fury and madness,
so that often they cast themselves head-long down from some high place, or are otherwise guilty of their own death,
with fear of which notwithstanding they are terrified. But we must note, Changes of the Native temperament, do often happen in the course of a mans Life,
so that he which was awhile agone was sanguine, may now be cholerick, melancholick, or phlegmatick; not truely by the changing of the blood into such humours,
but be mutation of Diet, and the course or Vocation of Life, for none of a sanguine Complexion, but will prove cholerick if he eat hot and dry meats;
as all like things are cherished and preserved by the use of their like, and contraries are destroyed by their contraries; and weary his body by violent Exercises,
and continual labour: And if there be a suppression of choleric Excrements which before did freely flow, either by Nature, Will or Art; be whosoever seeds upon meats generating gross blood,
as Beef, Venison Hare, old Cheese, and all salt meats, without all doubt sliding from his Nature; will fall into a melancholy temper,
especially, if to that manner Diet, he shall have avocation full cares, turmoils, miseries, strong as much study, carefull thoughts and fear and also if he sit much,
wanting Exercise; for so the inward heat as it defrauded of its nourishments, fair letter and growes dull, whereupon gross androssie humours abound,
is gone out of the belly, shall stuffe his panch with more: Who presently after meat runs into violent Exercises, who inhabit cold and moist places, who lead their life at ease,
in all idleness; and lastly, who suffer a suppression of the phlegmatick humour, accustomely evacuated by Vomit, Cough, or blowing the Nose, or any other way,
either by Nature or Art. Certainly, it is very convenient to know these things, that we may discern if we at the present be phlegmatick, melancholick,
or of any other temper, whether he be such by Nature or Necessity.